The wife was out of town visiting her sister, and the boy was along for the ride, leaving me with a couple of quiet days to work, catch up on sleep, and rejuvenate.

Many would ring in a bachelor throwback with a can of Pringles, a bag of beef jerky, and an all-you-can-watch buffet of Netflix reruns. My usual approach looks like nothing of the sort, and perhaps smacks of the paradoxical. In my ironic little ethos, resting is accomplished by participating in any number of adventures that will inevitably make me as tired as possible. And on this particular occasion, I was feeling up for a particularly good beating. So I gave my good friend (and fellow BlinkPacking blogger) Ian a jingle.

“Would you like to…” I began to ask, and before even hearing what was on offer, Ian responded with an emphatic, “Yes!” Turns out he was agreeing to a mountain road trip for a hike, and I knew that with Ian on board, the day would not disappoint.

A quick snapshot: Ian likes to run. Not pansy 5Ks, not a little jog on a treadmill. The guy signs up for 50K trail runs, and finishes them. He is in fact so into running that his latest purchase of Vibram-soled shoes cost just slightly less than the net worth of his wife’s car. Priorities. My overnight bus trips to faraway cities feel epic to me, but are only cute getaways when compared to the 36 hour, drive-all-night-until-you-reach-the-other-coast Ian-esque road extravaganzas. If I am a student of adventure, Ian is the professor, and clearly I have much to learn.

I rang Ian’s number to mull over the following day’s plan. Maybe I had a hankering for punishment. Perhaps I wanted to get in over my head. Whatever my sickly subconscious was stewing, I handed my friend the reins. “I want to have an adventure, man. You can just pick whatever you want; I am glad to be along for the ride.” We agreed on a 7:00 AM start. He would pick me up, and we would head over to the edge of North Carolina to hike a piece of the historic Bartram Trail, which he labeled, ‘fun,’ ‘easy,’ and ‘beautiful.’

After a sunrise start and a plate of eggs and potatoes at the ubiquitous Waffle House, the two of us were North Carolina bound, the rising sun strobing rays of brilliant light across the windshield. Having slept a grand total of four hours the previous night, I was sucking down coffee like a garbage disposal. Ian jockeyed tunes from his playlist as we bounded northward at 70 miles an hour.

The multi-lane freeway whittled down to a divided highway, and then again to a single-lane road. The meandering curves sharpened as the grade steepened, and we wound our way through breathtaking Carolina nothingness to the seven-space Osage Overlook parking lot and entry point to the famed Bartram Trail.

The trail’s first order of business is a 1100-foot climb up Scaly Mountain. A few paces in, Ian commented on my heavy breathing. I tried to hold it in. He hopped over boulders and flitted across stream crossings as I gingerly lumbered along, doing my best to keep smiling and keep up. Steadily we worked our way up the incline, past hidden waterfalls, through leafy undergrowth, and around rocky outcroppings.

And then from nowhere, the thick flora gave way to blue sky. For miles in every direction, we could see peak after hazy peak of the Carolina Appalachians. The view faded the challenge of the climb and dulled the throb in my ankles. I sat down to take it all in, to enjoy the accomplishment, to exhale.

“There’s this awesome rock cliff, and it is just up ahead. Let’s hike over there. The views are killer.” Okay, just a little longer. No big deal. We already did all the climbing. How much further could it be?

The trail started to snake down the other side of the mountain, deep into a wooded ravine. A few more miles passed as the sound of a rushing river came into range — a giveaway that we were back in a valley, but on the wrong side of the mountain. My head felt a little light as a makeshift campsite came into view, and we stopped for a bite of the food I was now thrilled to have shlepped this far. A quasi-phallic dried salami may be a despicable lunch any other day, but it was a divine taste of sustenance after tromping miles through the woods. We gladly devoured the whole thing, along with the salty cheese block and the friend corn.

Ian sang his mantra again, “Onward! I’m sure the overlook is just a little bit farther.” I set out for an adventure, and it was becoming clear I had found one. The next ‘little bit’ turned out to be four more miles, straight up the ridge of the next peak. My legs turned to noodles as I shimmied up one switchback after another. I began popping Advil like the were Skittles.

After trudging through the endless forest, the ground finally began to even out. Yet again, the thick growth gave way to open sky, and we found ourselves at a second breathtaking overlook (that, truth be told, looked strikingly like the first overlook six miles behind us).

I wanted to stretch. I wanted to nap. I wanted the Hilton. Ian spotted some grayish clouds floating over a distant peak. “Looks like the rain is headed in our direction. We better move.”

And just like that, he was running in the direction from whence we came. Not ambling, not strolling, but feet-in-the-air sprinting. “Expletive,” I mumbled as I channeled all of my strength to jolt my legs into animation. Four miles whizzed by and we were back at our lunch spot. I was ready for a steak and a beer.

Just one thing stood between ourselves and our ride home: Scaly Mountain. Up and over was the only way out of the woods, so we lifted our legs once again and began the ascent.

And then it happened. The heavens opened and a divine gift of God was bestowed upon me. My fearless, unstoppable, steel-bodied friend came to a halt. He had misstepped. His knee had twisted. He needed a break. My lugubrious facade blanketed my secret, internal happy dance. He wanted Advil. He wanted to rest. Hallelujah.

Somehow, the break from hiking, the cool air, and the epic sense of accomplishment all swirled together in that divine moment of respite — a cocktail that gave us both the impetus we needed to trudge up the last bit of mountain, crest the peak, and head down toward the car. Suddenly the earth was moving under our feet at a good clip; we found our rhythm and wound our way down Old Scaly and back to the lot.

A glance at the mounted trailhead map revealed our undertaking: we had traversed eight miles out and eight back for a grand total of sixteen — by far the longest hike I have ever accomplished. I am glad I was unaware when we took our first steps earlier in the day; had I known, I fear I may have opted for a Netflix marathon.

Now back in the car and headed toward the Blue Ridge Roadhouse for a victory steak and burger chomp, Ian and I shared an array of high-fives, bro-hugs, and other miscellaneous displays of bravado. We both knew we had participated in something special that day and had forged a memory that will forever bolster our friendship for the better.

The following video is the first I have ever produced, and though it has its demerits, I hope it gives you a flavor of the day. Enjoy. 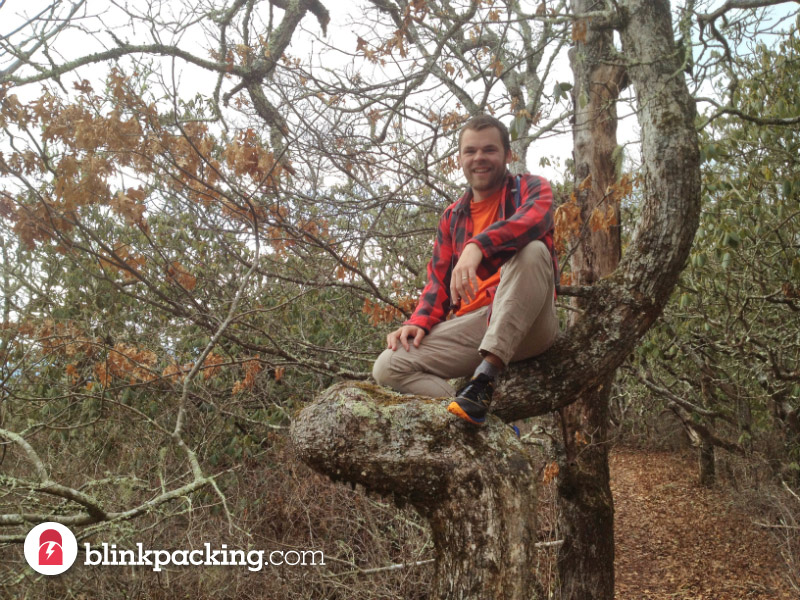 4 thoughts on “Take a hike”